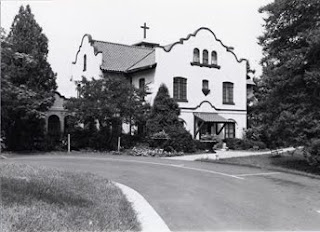 Does this building look familiar?

Lyonhurst, or Missionhurst as it is now known, is a Spanish Mission-style stucco house originally built in 1907 as a residence for Frank Lyon, an early developer in the County.

Lyon had traveled a great deal and was influenced by the Spanish missions he had seen in the American West. The house was built with large porches to catch the breeze in the hot summer weather, and he built a water tower on the property in the same Spanish style. The Lyon family was also one of the first to have electricity in the County.

The house currently serves as the headquarters for the Immaculate Heart Mission Fathers. Read more about Frank Lyon and his house on Our Back Pages.