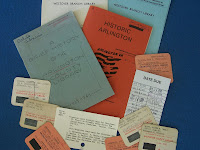 When you start to Tell Arlington’s Story, you find out lots of interesting trivia. Did you know that…

Information about these pieces of the Arlington Story and more can be seen on display at the Westover Branch Library during the month of April.