Library readers share their favorite books  – the ones they spend 10 minutes enthusing over, until you agree to read them too. 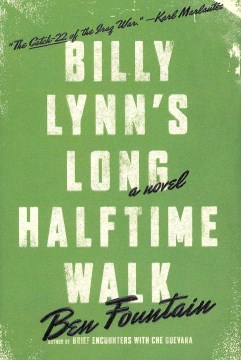 Specialist Billy Lynn is a 19-year old soldier from Texas who experienced a battle in Iraq worthy of future middle school textbooks, and earned a medal for his efforts. He and the other members of the famed Bravo team are traveling around the country on something like a victory tour – except the war isn’t over and has been dragging on for long enough that it’s shifted to the backs of people’s minds.

What I love about this book is how Ben Fountain shows us the many contradictions of the human heart. You feel the intensity of Billy’s wartime experience just as clearly as his late-teen malaise. You hear his beloved sister’s pleas to leave the war just as loudly as his desire to impress a girl who wants to believe he is a true American hero. You carry the weight of the exceptional sacrifices that soldiers like Billy make throughout their military careers as well as the tedium of having to make sacrifices throughout their military careers. And most of all, you feel the shocking contrast between the weight of those sacrifices and the thick patriotic sheen over things we allow to define American culture – with professional football, and the Dallas Cowboys in particualr, as the ultimate American symbol.

Critics have likened Billy Lynn’s to a Catch-22 of the Iraq War. Billy Lynn’s is not a Catch-22 of the Iraq War. Joseph Heller’s chef d’oeuvre achieved what only the most seamless satires can achieve: it can make you laugh out loud and question the very fabric of our society at the same time. Ben Fountain’s novel will make you question our society, but only the outer layers of it, and probably not with simultaneous laughter. He is a great writer who – though I’m not a male and probably never will be – has captured the heart of the young American male, who happens to be a soldier. You will laugh (probably in public), you will grow unhealthily attached to the characters, you will feel pride and disappointment, and you will definitely think again about what it means to be an American in an America at war.

Rachel is one of our Youth Services Librarians at Central Library.