“A book that made me even more in awe of the English Language and the Oxford English Dictionary. What can I say? I’m a nerd.”

Library readers share their favorite books  – the ones they spend 10 minutes enthusing over, until you agree to read them too. 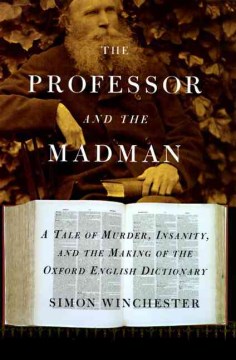 The Professor and the Madman: A Tale of Murder, Insanity, and the Making of the Oxford English Dictionary by Simon Winchester
Reviewed by Karen Sullivan

Good writing meets history and language. I’m a sucker for both, though I admit I’m horrible with dates.

The book starts with murder. The murderer is caught. He’s deemed insane. But as an American Civil War veteran and a doctor, he warrants special treatment. He’s off to Broadmoor Criminal Lunatic Asylum where he lives in relative comfort.

This could very well have been the end of Dr. W.C. Minor’s claim to fame (or infamy) but a huge project is underway, one that needs volunteers. When Professor James Murray took on the role of editor for the world’s most renowned dictionary – the Oxford English Dictionary – he had no way of knowing just how colossal a feat he was undertaking. Nor could he know that a verifiable lunatic would be his greatest asset and friend.

In the hopes of honoring Minor and his contribution of more than 10,000 definitions, an undertaking achieved before the advent of Google or anything resembling the modern dictionary, Murray discovers the truth about Minor: he is a murderer and insane. However, this does not stop Murray from becoming a true friend to a man whose mental health set him apart in Victorian England.

If you’re fascinated by the magnitude of the English Language, its innuendos, connotations and denotations, then this is a book you have to read. If you aren’t, you still have to read this book that paints a striking picture of friendship and determination in a world that struggles to understand both language and mental illness.