A Rock Is Lively
by Dianna Hutts Aston, illustrated by Sylvia Long

From the award-winning creators of An Egg Is Quiet, A Seed Is Sleepy, and A Butterfly Is Patient comes a gorgeous and informative introduction to the fascinating world of rocks. From dazzling blue lapis lazuli to volcanic snowflake obsidian, an incredible variety of rocks are showcased in all their splendor. Poetic in voice and elegant in design, this book introduces an array of facts, making it equally perfect for classroom sharing and family reading. In an expressive celebration of the world’s waterscapes, verse and mixed-media illustrations swing from placid to tempestuous, creating an effective and fitting ebb and flow. A description of a peaceful river scene inspired by the Yangtze (“Slow into rivers/ water slithers and snakes/ through silent canyons at twilight and dawn”) contrasts with an evocation of a violent Patagonia sea (“In storms, water plunges/ in thunder’s brash roar,/ races through branches from lightning’s white flash”).

The palette also shifts to suit the vista: children in Finland play by a brook framed by brilliant fall foliage, while smoky grays dominate a hushed scene featuring the human and feline residents of Venice, enshrouded in fog. Some of the images and allusions suggest water’s life-sustaining power: men fish in India, Kenyan women fetch water from a well, and in the canals of Holland, “water streams, water slides,/ gliding up roots of tulips and corn.” 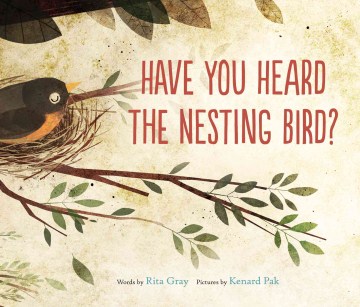 Have You Heard the Nesting Bird?
by Rita Gray, illustrated by Kenard Pak

As a boy and a girl walk in fields near their house, they see many birds and hear their distinctive calls. But a quiet bird captures the children’s attention. Sitting in her nest in a tree, the robin is alert but silent. The next morning, the duo hears sounds from the nest, beginning with “tapping cracking” and ending with “breaking shaking.” Three baby birds join the robin and her mate in the nest.

Over and Under the Snow
by Kate Messner

Over the snow, the world is hushed and white, but under the snow is a secret world of squirrels and snowshoe hares, bears and bullfrogs, and many others who live outside in the woods during the winter.

For this installment, kids from three of the Department of Parks and Recreation’s After School Centers visually reimagined the illustration of Messner’s book, using collage, block prints and watercolor:

From the “Creepy Critters” series, the text and illustrations explore how to watch spiders, what they eat, how they grow and stay safe, and more interesting facts.

“Spiders” is used with permission from (and gratitude to) Raintree, an imprint of Capstone Global Library and Coughlan Companies Community Fund. Trail Tales’ squirrel logo designed by student Annabella.

From the “Creepy Critters” series,  the text and illustrations explore how to find and watch beetles, what they eat, how they grow and stay safe, and more interesting facts.

“Beetles” is used with permission from (and gratitude to) Raintree, an imprint of Capstone Global Library and Coughlan Companies Community Fund. Trail Tales’ squirrel logo designed by student Annabella.