The Wired Photography of Ron Cogswell will be on display in the Cherrydale Library from Wednesday, Jan. 4 – April 2, 2012.

Adobe Photoshop substitutes nowadays for a darkroom.The Photoshop effects he applied to the images in this exhibit are the program’s “glowing edges” and “photocopy” effects. Mr. Cogswell served in the US Navy from 1969 to 1972 and now resides in Arlington with his wife Beth.

David Amoroso demonstrates his admiration for Latin culture through his artwork. His artistic passion is divided between painting, photography, and block and screen prints.

Although the majority of David’s work is dedicated to painting iconic portraits of everyday people, he also represents Mexican pop culture through his work.

A Tapestry of Paintings

On exhibit at the Westover Branch Library through February 2013.

Anne Lewis, an artist local to the Westover neighborhood, is trained as an art therapist and currently works with medically fragile children.  Anne’s paintings are based on her family’s favorite places in the DC area, where she often walks with her trusty pal Seamus-the-dog, while her 3 children are in school.

Anne’s current collection has been reproduced as a beautiful 2013 calendar. Visit her website for calendar purchase information, and to see a full array of her artwork.

Learn more about Art Exhibits at the Library. 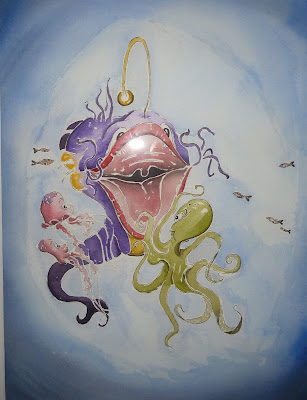 Montana DeBor is an artist living in Arlington Virginia. She has studied watercolor painting privately for many years and completed many solo professional shows. This exhibit has illustrations from her new children’s book “Annabelle the Angler Fish.”

“Engagement in creative expression can transport the artist from a dark place to one of color, form, and joy. This happened to me. As I began to suffer severe spinal pain and sciatica which were not helped by medications, I started drawing with felt-tipped markers on paper at times when the pain was at its worst.

The involvement with my art was so engrossing that the pain, while present, was ignored. Art helped me greatly—so much so that I could call this exhibit “Art: A Hedge against Pain.””

Portals: An exhibit of kiln-fired and mixed media wearable art and altar pieces created by Worth Cooley-Prost, on display at the Central Library through the month of November.

“My work is about connections of time, space and heart, and the value of looking closely. I love working with glass – it’s like an intimate conversation with light itself.

All my glass is hand-cut, one at a time, from sheets of specialized art glass, then fired in a small kiln in my home studio in Arlington. Most of my work includes dichroic glass,combining ancient methods of glass fusing developed by the Phoenicians some 4,000 years ago with the space-age principles of thin film physics used to make dichroic glass.

Glass is a visible, tangible expression of the great dance between Earth and Light – the core component of any glass is silica, a kind of quartz. Some of this Portals glass was infused with the energies of a particular full moon or new moon, especially at times of a solstice, eclipse, or a powerful astronomical alignment. (The Druids saw solar eclipses as key to recreating the world: an eclipse above means things are also eclipsed here below, releasing obsolete patterns so new ones can come through.) “

Through the holidays Westover Branch Library is delighted to have the work of local artist, Cecily Corcoran, on display.

From cityscapes to seascapes this artist explores life and nature, looking for color, rhythm and balance. Her aim is to “record a glimpse of natural beauty before it folds into time.”

These stunning paintings are on display through December. Paintings are for sale and more of her work can be found at www.cecilycorcoran.com.

An exciting relationship is in its beginning stages between Coyoacan, Mexico (one of Arlington’s sister cities), and Claremont Immersion School, a Spanish immersion elementary school here in Arlington.

Last year, art from Claremont’s students was exhibited in Coyoacan alongside art by students from La Escuelita Emilano Zapata. Now, as a result of the collaboration between both schools, we are happy to introduce an exhibit of work by the students of both schools, about their respective communities. 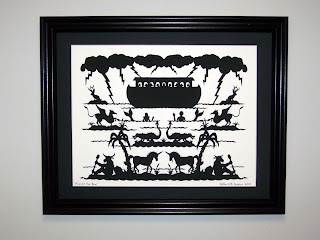 Artist’s Statement – “I use simple materials to create complex images out of paper. Silhouette paper is black on the front and white on the back where I draw my original designs in the reverse. Each piece is hand cut from a single sheet of paper, using an X-Acto knife or scissors. I take pride in the exactitude required to work with this rather unforgiving medium—one wrong cut and the piece is ruined. I also frequently employ vintage backgrounds, such as antique sheet music or ledger sheets, seeds packets, magazine advertisements or game piece cards, to contrast with the silhouette. Occasionally, I incorporate old postage stamps to inject color into a design, creating a stained glass effect. My designs are eclectic and range from more traditional works echoing German scherenschnitte to humorous contemporary pieces featuring nonconformist penguins, the evolution of golfers, or visual puns.” 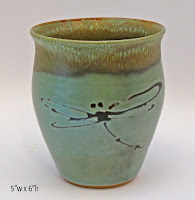 Arlington ceramic artist Larry Bowring displays his stoneware on the first floor of the Central Library, from October 1 – 31, 2011. 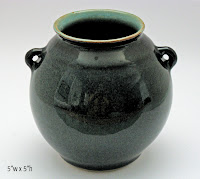 First Black Woman to win both the John Newbery … END_OF_DOCUMENT_TOKEN_TO_BE_REPLACED

All Library locations will be closed Mon., Jan.16, … END_OF_DOCUMENT_TOKEN_TO_BE_REPLACED

"Every reader his or her book. Every book its … END_OF_DOCUMENT_TOKEN_TO_BE_REPLACED