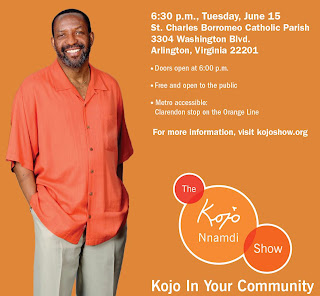 We just received word that the Columbia Pike Documentary Project photographers have been invited to attend Kojo Nnamdi’s ‘Kojo In Your Community‘ Arlington show, on Tuesday evening.

I told [the producer] about Teen Photo and the book we produced celebrating our community with portraits and stories.  She was very interested in our work and asked me to bring her copies. She expressed special interest in the issue of development that is considerate and fair to current residents, rather than concentrating on expensive, “high-end” re-development that drives out the people and shops that give our neighborhood its richly diverse character.  She said it would be great to have some community folks like Teen Photo members, their families and friends, and other neighborhood supporters come be a part of the audience.

I’m sharing this invitation with you so that you could join in the show–if not in person, then at least by listening to the radio and maybe participating by calling in! It should be fun!

The show will be broadcast live from St. Charles Borromeo Catholic Church, in Arlington, starting at 6:30 p.m., on WAMU 88.5 FM.  Anyone interested in being part of the audience should arrive by 6:15 p.m.