Looking for a Great Book? We're Here to Help!

2022 saw many new exciting books being published. Colleen Hoover’s books have been everywhere, as well as great memoirs by stars like Jeanette McCurdy and Matthew Perry – even one by Michelle Obama!

With so much information around us it’s easy to miss a new release. We have put together a curated list from our 2022 catalog of gems we believe should be on everybody’s reading list. All of these books received rave reviews, but flew beneath Arlington’s radar.

These books are sorted into five subcategories: fiction, nonfiction, teen, elementary/middle grade, and picture books/early readers. And much like browsing the library’s shelves in person, you're sure to find something unexpected and delightful here!

To see which books Arlington readers checked out the most this year, click here.

We’re always thankful for books, and this month we’re especially grateful for these new titles! 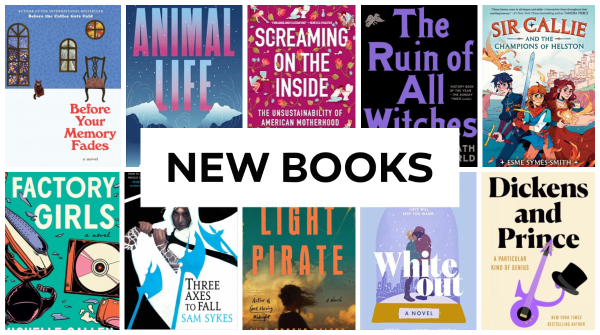 Fans of Derry Girls will want to read "Factory Girls" by Michelle Gallen, a darkly comic novel set in 1994 about a group of friends working a summer job at a factory in Northern Ireland while waiting for their exam results. For a cozier read, Toshikazu Kawaguchi’s "Before Your Memory Fades" is the third installment in the series that started with "Before the Coffee Gets Cold" about a coffee shop that lets you travel back in time for just a few minutes.

"Ruin of All Witches: Life and Death in the New World" by Malcolm Gaskill explores a witchcraft trial in Springfield, Massachusetts forty years before the Salem witch trials. Novelist Nick Hornby’s "Dickens and Prince: a Particular Kind of Genius" plays tribute to two artists who inspire him, drawing surprising parallels between novelist Charles Dickens and musician Prince, despite their more obvious differences.

Middle Grade readers will want to check out "Sir Callie and the Champions of Helston" by Esme Symes-Smith, the first in a new series about a a group for friends who have to fight the bigotry in their own kingdom before they can help defeat an encroaching evil.

Stevie has a grand plan and several friends to help her carry out a grand romantic gesture to win back her girlfriend Sola, but Atlanta is preparing for a once-in-a-lifetime snowstorm. As they battle the weather, Stevie and Sola won’t be the only couple finding love on this cold night in "Whiteout," a heart-warming teen romance written by the dream team of Dhonielle Clayton, Tiffany D Jackson, Nic Stone, Angie Thomas, Ashley Woodfolk and Nicola Yoon.

Since the violent protests by white supremacists in Charlottesville, VA in 2017, the threat of renewed political agitation by neo-Nazis has haunted public safety officials. There may be some lessons to be learned by looking into our own local history.

Why did George Lincoln Rockwell, a former American Navy veteran, choose Arlington County as his base of operations for his racist and anti-Semitic American Nazi Party?  This and other questions are answered in Clark’s illustrated talk, presented in partnership with the Center for Local History.

A longtime journalist in the Washington, D.C. area, Charlie Clark writes the weekly “Our Man in Arlington” column for the Falls Church News-Press. He has just published his fifth book, a memoir of adolescence titled “My Gap Year–Reinterpreted.” Last year he published “George Washington Parke Custis: A Rarefied Life in America’s First Family,” with McFarland Books. With the History Press, he has published “Lost Arlington County, Arlington County Chronicles,” and “Hidden History of Arlington County.” In July 2019, he retired as senior correspondent for Government Executive Media Group, part of Atlantic Media. He previously has worked as an editor or writer for The Washington Post, Congressional Quarterly, National Journal, Time-Life Books, Tax Analysts and the Association of Governing Boards of Universities and Colleges. He lives in East Falls Church with his wife Ellen.

The Friends of the Arlington Public Library (FOAL) will not be accepting book donations from Friday, October 21 through Friday, November 4, due to the FOAL Fall Book Sale.

Please do not leave donations at any Library location during this time period.

Financial donations can be made at any time at the FOAL website.

Reminder: this is a spoiler-filled podcast. So if you’re not into that kind of thing, read the books first and come back later.

For this episode we read both Maria Headley’s translation of the Old English epic poem "Beowulf" and “The Mere Wife,” Headley's 2015 retelling of Beowulf, which is set in present-day New York.

Donations can be dropped off at the Columbia Pike Library service desk through Tuesday, Aug. 16. Reminder: this is a spoiler-filled podcast. So if you’re not into that kind of thing, read the books first and come back later.

For this episode we read both Maria Headley’s translation of the Old English epic poem "Beowulf" and “The Mere Wife,” Headley's 2015 retelling of Beowulf, which is set in present-day New York.

UPDATE AUGUST 10: All service has been restored.

We are currently experiencing connection issues with our ProQuest databases, resulting in full and partial outages.

The affected products include:

We're working with the vendor on a resolution, and apologize for the inconvenience.

Enjoy the last few weeks of summer with these great reads, many of which feature local connections!

In Jazz Age DC, a typist assembles an unlikely group to pull of a supernatural heist to stop a growing terror stalking Black Broadway in "The Monsters We Defy" by Leslye Penelope. Travel to 1980s New York as the fictional Trey Singleton navigates life and activism at the height of the AIDS crisis, meeting several real-life figures along the way in "My Government Means to Kill Me" by Rasheed Newsome.

Local meteorologist Matthew Cappucci explains weather and his life-long obsession with storms in "Looking Up: The True Adventures of a Storm-Chasing Weather Nerd." Washington Post reporter Helena Andrews-Dyer explores motherhood, race, and class through the lens of her experiences in a neighborhood mothers group in gentrified Bloomingdale in the wake of George Floyd’s murder in "The Mamas: What I Learned About Kids, Class and Race from Moms Not Like Me."

Middle Grade readers will fall for Adela’s exploration of family when she learns her estranged biological father and extended family are famous luchadors in Celia C. Pérez’s "Tumble." Teen readers will enjoy the spooky horror of what happens when Cali and Maz’s missing best friend shows up five years after disappearing, but he's stayed the exact same age in "Dead Flip" by Sarah Farizan.