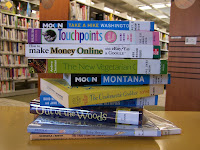 Discoveries in the Stacks is the Westover Branch Library’s occasional exploration of our collection, delving into areas that you may not have visited.

Who says you can’t have your cake and read it too?

With the holidays just around the corner, we indulge in a little fictitious food…before the real meals are on the table. For gourmet mysteries, sample a few of the following:

Enjoy this season’s bounty – and we’ll see you next time in another part of the stacks!