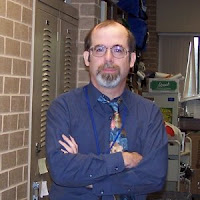 Does the branch manager at the Aurora Hills Branch Library seem familiar?

If you’re a long-time resident of the neighborhood, you might recognize him from his first job with Arlington Libraries – Neil began as a Young Adult librarian at Aurora Hills almost 30 years ago, when he was right out of library school. Since then, Neil has worked as the Library’s Outreach Services manager, and as branch manager at the Detention Center, Westover and Cherrydale.

And when not working with the Aurora Hills community, Neil enjoys collecting music from between the World Wars.