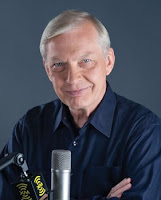 Legendary voice Bob Edwards will discuss his pioneering work at NPR and Sirius XM Satellite Radio – plus look back on his friendship with sportscaster Red Barber and the legacy of Edward R. Murrow – when he appears June 14, 7 p.m., at Arlington Central Library Auditorium.

Edwards spent 30 years with National Public Radio, anchoring “All Things Considered” before waking up millions of listeners as the founding host of “Morning Edition” from 1979 to 2004. He took his thoughtful, well-researched approach to satellite audiences with the daily Bob Edwards Show and is now also heard back on public airwaves with the weekly Bob Edwards Weekend. His many awards include a Peabody and inclusion in the National Radio Hall of Fame.

Mr. Edwards revisited his weekly NPR chats with Barber in Fridays with Red: A Radio Friendship and tackled the roots of electronic newsgathering in Edward R. Murrow and the Birth of Broadcast Journalism. He’ll publish his own memoir, “A Voice in the Box,” this fall.

A longtime Arlington County resident, Edwards is the featured speaker at this year’s Friends of the Arlington Public Library annual meeting. His remarks will begin after brief Friends business.

Refreshments will be served at this event and copies of “Edward R. Murrow and the Birth of Broadcast Journalism” will be sold and available for signing at the end of the evening. For more information, call 703-228-6321.