Luna Park was an amusement park that opened in Arlington (then known as Alexandria County) in 1906.

It was situated along Four Mile Run at South Glebe Road and South Eads St., where the county’s water pollution plant is now located. Brochures described it as “A Fairyland of Amusement Overlooking the Beautiful Potomac” and “an architectural fashion plate.” It offered many attractions, including rides, a “shoot the chutes,” a ballroom, band stand, a Temple of Mystery, moving picture theater, and even slot machines!

The exact date the park closed is not known, but some years later a fire did extensive damage to the park, and the owner dismantled it around 1915.

The Virginia Room owns a Sanborn fire insurance map (see detail above) of Luna Park, which shows the locations and sizes of its buildings. There are also several photographs in the Community Archives of Luna Park’s attractions. 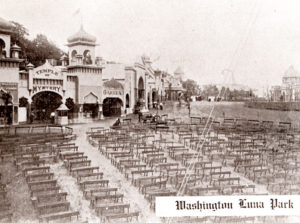 What kinds of fairs and amusement parks have you attended in Arlington? Has a family member ever told you about their trip to Luna Park? If so, let us know!