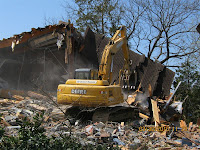 The old Westover Branch Library building was demolished on Tuesday, March 30, 2010 to make way for green space, part of the final phase of the Westover transition.

See photos of the demolition

The original Westover Library opened in 1949, when it occupied two apartments at the corner of Washington Boulevard and Longfellow Street. In 1963, a split-level structure at 1800 N Lexington St became the first official Westover Branch Library building. The current Wesover Library/Reed School, at 1644 N. McKinley St. opened to the public on October 30, 2009.