Watch video of the full program on vimeo. 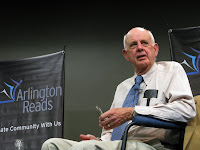 It wasn’t the Beatles at Shea or Hendrix at Woodstock. Or even the Jonas Brothers at Times Square on New Year’s Eve. But it might have been. For when farmer-writer Wendell Berry slipped through the side door of the Central Library Auditorium, he caused an unprecedented eruption of goodwill and generosity, the likes of which he had never before witnessed. And neither had we.

So the evening began, our fifth annual Arlington Reads main event, presided over by a courtly storytelling philosopher who kept his audience both spellbound and hopeful. His messages were simple: keep faith with yourself, your community, your land—messages that have been lost in the haze of hubris and hucksterism.

He spoke of his influences — Wallace Stegner and other writers of place — and his progress as a writer. And he read from “The Memory of Old Jack” in a voice rich and sonorous, languid and unperturbed, sharing the excerpt about the ambiguity of leaving, the passing of the torch from the seasoned old to the barely formed young, like they did in the communities of bygone eras.

He told us to know and be proud of our space; to ignore what the educators tell us and to be from some place. To know the world through truly knowing what is familiar. To go back to biology, to touch, to feel and to value what is tangible. To stop using too much. To buy local. To exercise leadership from the bottom up. To understand that life is both lucky and luckless, something as a farmer he would know all too well. To know that to feel joy one must also feel pain. To value hard work, to be useful. To have hope, to look within ourselves for the strength and courage to beat back the false idol of bigger/better.

A class act – the real deal.

It has taken us five tries to get here, but with last night’s event we have finally created the Arlington Reads community that we have sought. It just took the right topic, the right persons, the right audiences, and the right time. Last night was absolutely Mr. Berry’s, but both he and Novella Carpenter have helped launch us on this path to transformative civic engagement.

It’s now up to us to look within ourselves and find the means to take the conversations we have been having during this season of Arlington Reads and pursue sustainable actions for the betterment of the whole community of Arlington.

We urge you to join us.

And we now know that one can not go wrong with any brand of Kentucky bourbon.

(Photos can be viewed on the Library’s Flickr collection.)