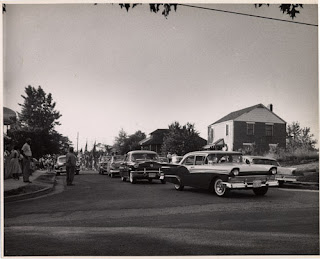 According to an article in the American Business Review in December 1929, Ruby Lee Minar was the “most successful woman in realty development in the country”: high praise at a time when there were few women in the workforce, much less in a profession dominated by men.

Ruby Lee was born in Montana in 1883 to a Baptist clergyman and his wife. They moved several times during her childhood and it is said that when her father was unable to officiate at Sunday morning services, Ruby Lee preached the sermon for him. She received her B.A. from Kalamazoo College and also received a Master’s Degree from the University of Chicago. She taught public speaking for a time and was chosen as Chair of the Women’s College Section of the Women’s Suffrage Party for the state of New Jersey. After marrying John Milton Minar, the couple settled in Washington, D.C. and it was there that her profession changed from teacher to real estate developer and entrepreneur.

At the close of WWI, Mrs. Minar had a savings account of only $200 in Liberty Bonds.  However, she invested the bonds in lots in Chevy Chase, MD, and four years later purchased a 400 acre tract in the County Club section of Arlington, naming it Lee Heights. She then successfully developed a three million dollar subdivision project and later went on to develop a number of other subdivisions. She accurately foresaw the time when Arlington would become a bedroom community of DC, and at one time her real estate office was the largest in the area.

Ruby Lee was elected the first president of the National Soroptimist Club in 1928. Soroptimist International is a worldwide organization for women in management and professions, working through service projects to advance human rights and the status of women. Today the Ruby Award, which honors women who are making extraordinary differences in the lives of other women, is named in her honor.

The Virginia Room holds the papers of the local Soroptimist Club, which is no longer active. The photograph above is of a parade in Lee Heights, circa 1950.

What about you?
Do you have memories of Lee Heights? We want to hear from you!