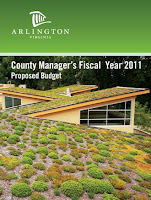 We’re a few months into the new fiscal year and I thought it would be a good time to check in.

Arlington’s library system is highly regarded in both the region and the nation and the department is making significant efforts to balance the cuts.