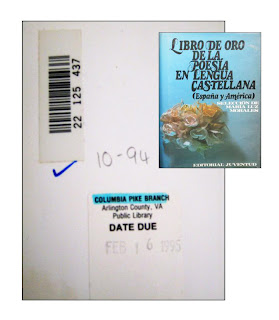 The book, Libro de Oro de la Poesi en Lengua Castellana (Golden Book of Poetry in Spanish) was returned to the Columbia Pike circulation desk on Sunday, Oct. 17, 2010 – fifteen years and eight months after it was originally due (the due date stamp is faint, but it reads FEB 16 1995).

The book was recently found in Honduras, and mailed to the U.S. by the brother of the patron who returned it to us. Thank you!