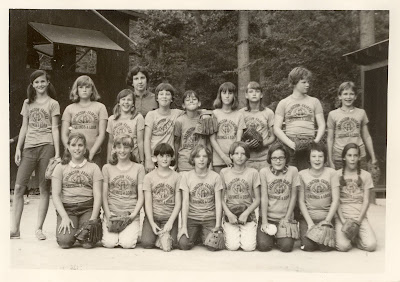 Baseball became a part of my life on a cool evening in the late summer of 1960 at Griffith Stadium in a game between the New York Yankees and the Washington Senators. The Yankees won. And from that evening on, I was hooked on both baseball and the Yankees.

In the months before my 10th birthday in June 1964, my father smoked enough Phillies cigars to collect a Mickey Mantle Big Leaguer Rawlings baseball mitt for my birthday present. When I opened the box it arrived in, and saw it nestled there among tissue paper and a color, “autographed” photo of Number 7, I could not have been more thrilled.

Finally, my own glove to fit my hand–not a battered hand-me-down cast off by the neighbor boys. For the next several months, I lovingly seasoned it with a little Neatsfoot oil and scores of games of “hotbox” (aka pickle). By the following spring I was ready to be called up to the newly formed Arlington-Fairfax Savings and Loan softball team for pre-teen girls, one of a dozen or so teams that comprised Arlington’s Pigtail League (as differentiated from the Ponytail League for older girls), and administered by the Better Sports Club of Arlington, they of the “Better Sports Today, Better Citizens Tomorrow.”

We were “coached” by a willing neighborhood mom, a sports naïf whose children were dragged to practices and left to whine “can we go home NOW?” from the bleachers while we tried to turn two and shag fly balls.

I played shortstop with a wicked side arm that more than once pulled our leggy first baseman off the bag. But when the 6-3 worked, it was sublime. (Hitting was another story. It was not for nothing that I earned the moniker “good field, no hit.”)

Over several blissful weeks, on unforgiving elementary school ball fields and Barcroft fields under the lights, we scratched out a 3-10 record, playing less like New York’s baseball finest, the Yankees (locally, that honor fell to the Conklyn’s Florist team) and more like the hapless, expansion Mets. And I couldn’t have cared less. I was doing what I loved to do.

As another June rolls around (and another birthday, too), it’s hard not to think of lessons learned both on and off those dusty fields of dreams. So here’s to Mrs. Miller, Kay, Kim, Debbie, Barbara, Mimi, Baby Ruth, Janis, Nancy, Jane, Gayle, Carol, Ginny, Linda, and all the rest of the girls of summer who taught me teamwork, humility and how to take joy from a game well played regardless of the outcome.

Arlington Public Library has a terrific collection of DVDs and books that celebrate our national past time. Here are just a few of our favorites.