They put you down, they say I’m wrong

You tacky thing, you put them on

You don’t know what you’ve got until it’s gone.  I have been feeling that way for the past few days while reading the many moving tributes to the late cultural icon, David Bowie.  I have been reminded, too of how much he had been a part of my life without actually being in my life.  Just a handful of years older then I, Bowie personified where I was or, more often, where I wanted to be through his many reinventions. There was Bowie the glam, Bowie the space oddity, Bowie the bi-, Bowie who fell to earth, Bowie the fashionista, Bowie the crooner, and Bowie the Warhol, his sly turn as the High Priest of Pop as if he needed another 15 minutes of “Fame.” 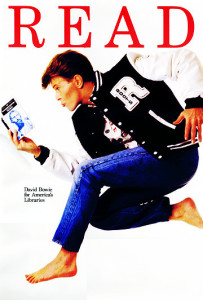 On vinyl, film, the stage, in the pages of glossies, on the arms of super-star models, Bowie was the protean taste shifter, the master of surprise, the eyebrow raiser, the envelope pusher. He always seemed to get “there” –wherever “there” was – ahead of everyone else.  When it was hip to be hip, he was the hippest; when cool was the thing, he was ice.  Imagine Bowie as Mr. Freeze instead of Schwarzenegger (“Holy ‘hasta la vista, baby’ Batman”).  Even the recent fuss over Jaden Smith (Will’s son) wearing a dress in an apparent nod to gender fluidity felt pretty “been there.”

David Bowie’s life was devoted to art and over many decades he shared the fruits of his curiosity with all of us.  One gift of his he may not have been conscious of sharing: the gift of courage.  Through his example, he showed all of us how to live a life of purpose and authenticity. How to believe in ourselves, especially when others don’t.  How to be a private person in a very public business.  How to court change and relish difference.  How to keep it real and fresh.  And how to keep on.

I read a few weeks ago about the release of his latest album – number 25, and thought, wow… good for him, still out there doing it.  And as I listen to it now, and realize it’s not the latest but the last, I feel privileged to have been a witness to a life well lived.  About his artistic journey, Bowie once said, “I don’t know where I’m going from here but I promise it won’t be boring.”

Explore the bulk of Bowie’s stellar recordings, even the before-its-time Tin Machine, for free through hoopla.

Don’t have an account? Create yours through the Library.

As to books, the Goblin King really enjoyed those too.