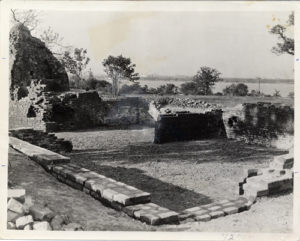 The ruins of Abingdon Plantation sit on a hill by a roadway in busy Ronald Reagan Washington National Airport.

The property began as a 6000 acre land grant to Robert Howson in 1669, which was traded to John Alexander for 6000 hogsheads of tobacco. A member of the Alexander family built the first part of the plantation house in 1746.

Abingdon Plantation was purchased in 1778 by John Parke Custis, stepson of George Washington, who wished to locate his young family close to Mount Vernon. The Custis family’s plans were cut short when John Custis died from camp fever at Yorktown in 1781. His widow, Eleanor Calvert Custis, married Dr. David Stuart, an Alexandria physician in 1783 and had 13 more children. The two oldest Custis girls, Elizabeth and Martha, resided with the Stuarts, while Nellie and George Washington Parke Custis grew up at Mount Vernon. The Stuarts returned the Abingdon Plantation to the Alexander family in 1792.

In the years following Abingdon Plantation was occupied by Union troops during the Civil War. The plantation’s productivity was hampered by the nearby development of several brick manufacturing companies and the region’s growing transportation needs, with the Washington Alexandria and Mount Vernon electric railway, the Richmond, Fredericksburg and Potomac Railroad and the Mount Vernon Memorial Highway (later GW Parkway) cutting into the land.

A fire destroyed the abandoned and deteriorating Abingdon home on March 5, 1930. In 1938 President Roosevelt selected the site for National Airport which opened in 1940. Today, the airport’s parking area surrounds the ruins of the main house, which can be seen by the nearby metro line. Visitors can see artifacts from the Abingdon house site in a special exhibit hall inside the airport, and the site is open to the public.

What About You?
Have you visited the Abingdon Plantation site? Let us hear from you!