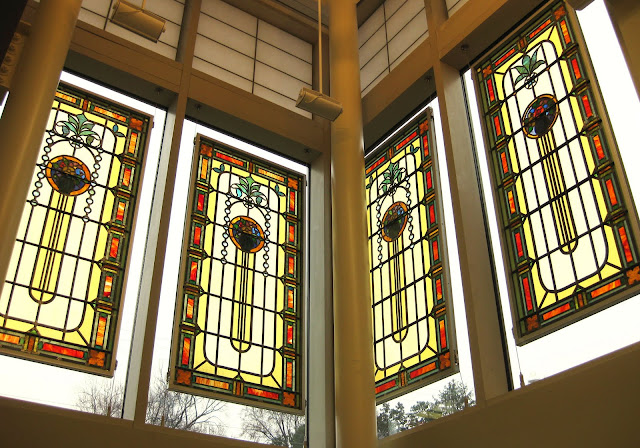 Permanently installed at the Westover Branch Library in 2010.

Many thanks to Cultural Affairs’ Public Art Program for helping the Library to procure the windows, as well as the previously installed granite finial. We hope that our patrons will enjoy seeing them!

Three other Tiffany windows rescued from the Abbey Mausoleum were installed at the Arlington Art Center in 2004. From an Arlington County press release:

It was the type of discovery that makes an historian’s heart quicken. Three years ago, Arlington County staff rescued 13 stained glass windows from the Abbey Mausoleum, slated for demolition.

Upon closer examination, Cultural Affairs Division and the Historic Preservation Program staff discovered a signature pane on one of the windows that read “Louis C. Tiffany, NY” which appears to be authentic, based upon typical examples Tiffany’s signature from the period and consultation with several stained glass experts.

Today, three windows have been restored to their original beauty and installed at the Arlington Arts Center, 3550 Wilson Blvd.

Twelve of the 13 original mausoleum’s windows had a simple geometric/floral composition. The 13th and largest window is religious themed, portraying Christ extending his hand in benediction. It is this window which contains the signature pane, which confirms, at minimum, this panel’s authenticity to the degree possible absent written documentation of the commission.

The window is dedicated to E. St. Clair Thompson, a wealthy Mason who was interred at the Abbey Mausoleum in 1933, and likely commissioned by his family, possibly with the rest of the geometric windows, in memoriam. The panel (as well as all the windows when originally removed from the Mausoleum in 2001) is severely damaged from years of vandalism and neglect and in storage until an appropriate mode of deaccessioning it may be determined.

The restoration and expansion of the historic Maury School for the Arlington Arts Center provided the windows with a new home. Three geometric windows were selected for restoration and installation at the Center and were successfully repaired with the use of matching glass fragments from the other Mausoleum windows that were damaged beyond repair. The windows now appear much as they did when they were first installed at the Abbey Mausoleum decades ago.

About Abbey Mausoleum
Built on a hillside overlooking Arlington Cemetery and the Potomac River in 1924, the Abbey Mausoleum was once a grand final resting-place for Washington, DC’s elite. The mausoleum, built by the United States Mausoleum Company from 1924 to 1926, was an impressive Romanesque style structure that neighbored Arlington National Cemetery and in 1942 was included within the grounds of Henderson Hall, the U.S. Marine Corps headquarters.

With its granite exterior, marble interior, and stained glass windows, the building was said to have resembled a cathedral. With the bankruptcy of the managing Abbey Mausoleum Corporation in the 1950s, the building fell victim to vandalism and neglect.

In 2000, the U.S. Navy gained ownership of the site, which it wished to redevelop. Based upon the mausoleum’s poor condition, the Navy decided to tear it down. They then assumed the enormous task of contacting the families of those interred at the mausoleum in order to relocate remains, a process which took several years. Arlington County was given the opportunity to salvage architectural features from the historic building, including the Tiffany windows.