By the end of World War Two, Arlington County was in the middle of a housing crisis. The completion of the Pentagon in 1943 made the area a prime destination for government workers as well as troops returning after the war, more than doubling Arlington’s population from 57,000 to 135,000 between 1940 and 1950.

Residential construction had almost completely stopped during the war years due to materials rationing. One solution to this nation-wide housing crisis came from inventor Carl Strandland, who converted his steel factory in Columbus Ohio - which had built bombers during the war - into an assembly line for cheap, pre-made, steel houses that required as little maintenance as possible.

In 1947, Strandland’s factory began to turn out the components for “fireproof, termite proof, and vermin proof” Lustron Homes - 11 of which ended up in Arlington. Each house was created piece by piece on an assembly line in the main factory in Columbus, Ohio and then shipped unassembled by truck to the desired location. Once the components arrived, it would be assembled by a licensed "Builder/Dealer." Most of the homes in Arlington were constructed by local companies Carlton Construction or Construction Associates. Construction could take anywhere from 9 days to 3 weeks, depending on the experience of the crew.

The homes were one story, constructed from steel with a porcelain steel enamel cover available in typical 1950’s colors such as surf blue, dove gray, desert tan, and maize yellow. The inside was designed to be modern and futuristic, aimed at making life as easy as possible for young families.

To set Lustron apart from other prefabricated homes, design features included a round fireplace and a radiant ceiling heating system, which integrated with the metal walls to trap heat. They also came with a built-in combination washing machine/dishwasher, bookshelves, and wall units.

Much of the appeal of the Lustron Homes came from the ease of cleaning; the metal paneled interior walls were easily washed with water. Homeowners could simply take a hose to the outside of their house in order to clean it.

The affordable price of the homes put them in high demand; they began at about $6,000 but had jumped to almost $10,000 by 1950 in an effort to make the company more profitable.

After a model Lustron Home was placed in Foggy Bottom, over 1200 orders were placed in the DMV area in a few months. But due to strict housing codes that affected what kinds of homes were built, difficulty obtaining permits, and delivery issues, only 11 homes were completed in Arlington. The largest concentration of these homes were 5 of the Westchester Deluxe Model 2 homes, built in the Columbia Forest neighborhood in 1949 as part of a failed planned community of 100 prefabricated, metal homes.

Although a large collection of Lustron Homes were built at the Marine Corp Base in Quantico, only 4 more were built in the DMV area before the company went out of business in 1950. 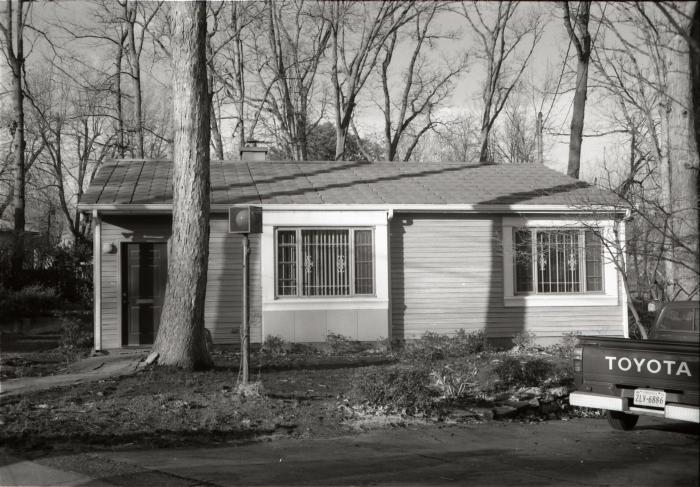 Of the 11 original Lustron Homes in Arlington, only two remain. Most were destroyed in the last 20 years, to make way for larger, more modern housing.

In 2005, local Lustron owner Clifford M. Krowne offered to donate his nearly original Lustron Home to Arlington in exchange for the County’s removal of the house from his property. The next year, the County Board accepted responsibility of the house by disassembling and placing it into storage until a suitable use could be found for it.

Krowne’s home experienced a short period of national fame when it was loaned to the Museum of Modern Art in New York for the exhibit, “Home Delivery: Fabricating the Modern Dwelling,'' from May to November 2008. Only partially reconstructed for the exhibit, the Lustron Home helped to illustrate the fad of pre-made houses in the 20th century. Krowne Lustron being dismantled: the crew removes the steel framing pieces supporting the chimney flue, and the crane lifts another whole roof truss off and over the shell of the house. 2006 photo by Cynthia Liccese-Torres and Kim A. O'Connell, courtesy of CRM Journal, National Park Service.

After the exhibit in New York, Arlington County placed the Krowne Lustron Home back into storage until 2011, when the County Board voted unanimously to donate it to the Ohio Historical Connection, which holds the Lustron Corporate Archives. Reassembled as the centerpiece of the exhibit “1950’s: Building the American Dream,” the Home has seen over 870,000 visitors since 2013.

Although some have described the houses as, “like living in a filing cabinet,” or complained that they “had felt a draft through the walls on cold, gusty nights,” the homes were also popular and well received. A 1980 Washington Post interview with a homeowner described her home experience living in a Lustron Home as, “sturdy and well built. Snug-fitting doors and windows make them very comfortable...she particularly appreciates the ease with which she can clean the attractive, hard-finished interior.”

Do you have any memories of living in or visiting a Lustron Home in Arlington? We want to hear from you!