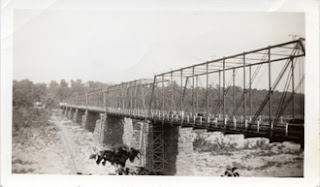 There have been eight bridges built on this site.  The original one was a covered wooden structure that collapsed in 1804, and the second was destroyed by floods after only 6 months. In 1810, a third bridge was constructed that was truly a “Chain Bridge,” the name by which all subsequent bridges have been known.