Arlington is home to many examples of interesting architecture, but the Bay-Eva Castle (also known as Jacobs Castle) stands as one of the most dramatic buildings to grace the County’s landscape. Overlooking the Potomac on a bluff of the Palisades near Rosslyn, in an area near what is now the Fort Bennett Park and Palisades Trail, the 9,200-square-foot fortress became well-known throughout the region.

The building was the home of obstetrician and gynecologist Dr. J. Bay Jacobs and his wife, Eva Harris Jacobs. Dr. Jacobs was a well-known physician and worked at the Georgetown and Arlington Hospitals. The location of the castle, halfway between those two localities, was perfect for the demands of his career and for access to the city. Eva Jacobs was also involved in the Arlington community as President of the Business and Professional Women’s Club and as the author of the historical novel “Feather on the Dart.”

The castle was designed after a trip the couple took to Bavaria in the 1930s, drawing inspiration from the sweeping turrets and stonework found in Bavaria's historic buildings. When the couple returned, they began construction in 1938, with ongoing additions and improvements being added into the 1950s.

The property the castle was built on was part of the former Thomas B. Dawson Estate, 81 acres that also included the Dawson Bailey House (now maintained by the County as part of the Dawson Terrace Community Center). The Jacobs family then bought 4 acres - what was called the “Spring lot” - from Thomas Dawson’s daughter Bessie Dawson in 1936. According to the Historical Marker Database, Mrs. Jacobs drew out the design for the home while sitting outside on a tree stump in the rain, sheltered by an umbrella. The outside of the castle took three months to cover with stone, and in some places, the stone walls were 18 inches thick. It was also constructed with a slate roof, copper gutters, and oak flooring.

The abode included an indoor tiled fish pond, as well as a wrought iron staircase in the castle’s 35-foot turret, and flooring in the first-floor living room with a motif of carved butterflies in the shape of a bowtie. The turret also included an additional room that Eva Jacobs used as a studio space. After the death of Eva Jacobs in 1979 and Dr. J. Bay Jacobs in 1988, the castle was deeded to the American College of Obstetricians and Gynecologists, and the antique furnishings were sold at auction. The property was later sold by the College to a developer, who had planned on developing the land into a community center. However, before these plans were realized, they went bankrupt and the property was foreclosed on.

According to The Arlingtonian, in the early nineties the castle was used as a collective house for a group of recent college graduates, who paid $1,000 in rent for the entire structure.

The castle was razed and demolished in November 1994. Many Arlington residents remember the castle as it stood, with many commenting on its “eerie” presence. In keeping with this reputation, when demolition workers were going through the house, the body of a baby was found in a small boarded passageway. This was explained to be one of the preserved bodies of stillborn babies Dr. Jacobs used in his teaching as an obstetrician, and no criminal charges were filed.

Today, a historical marker and a stone column bearing the Bay-Eva Castle name are the last remnants of the grand building that once stood on the bluff. 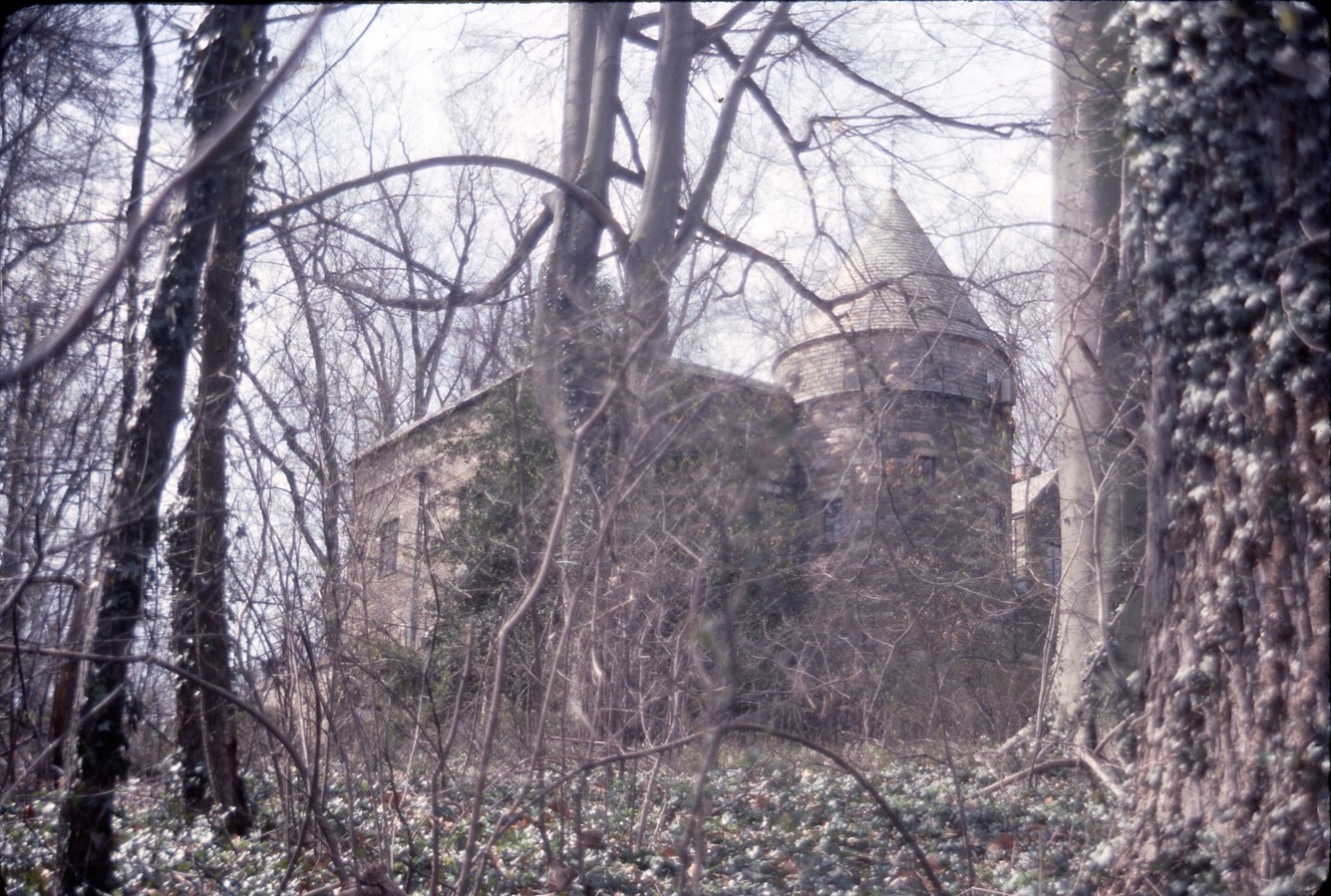