Before European colonization, a Necostin Native American village was located on the land near the current Village at Shirlington shopping center. On January 21, 1705, William Struttfield, one of 48 original settlers who owned land in present-day Arlington, patented a 543-acre tract south of Four Mile Run that included what is now Shirlington. He sold the land to Colonel John Carlyle and it stayed in the Carlyle family into the mid-19th century.

The hill southwest of present-day Shirlington served as a fortification within the Defenses of Washington that were erected by Union forces during the Civil War. Fort Blenker, later renamed Fort Reynolds, was built in 1861 and selected by the Union due to the view it afforded of the valley along Four Mile Run. 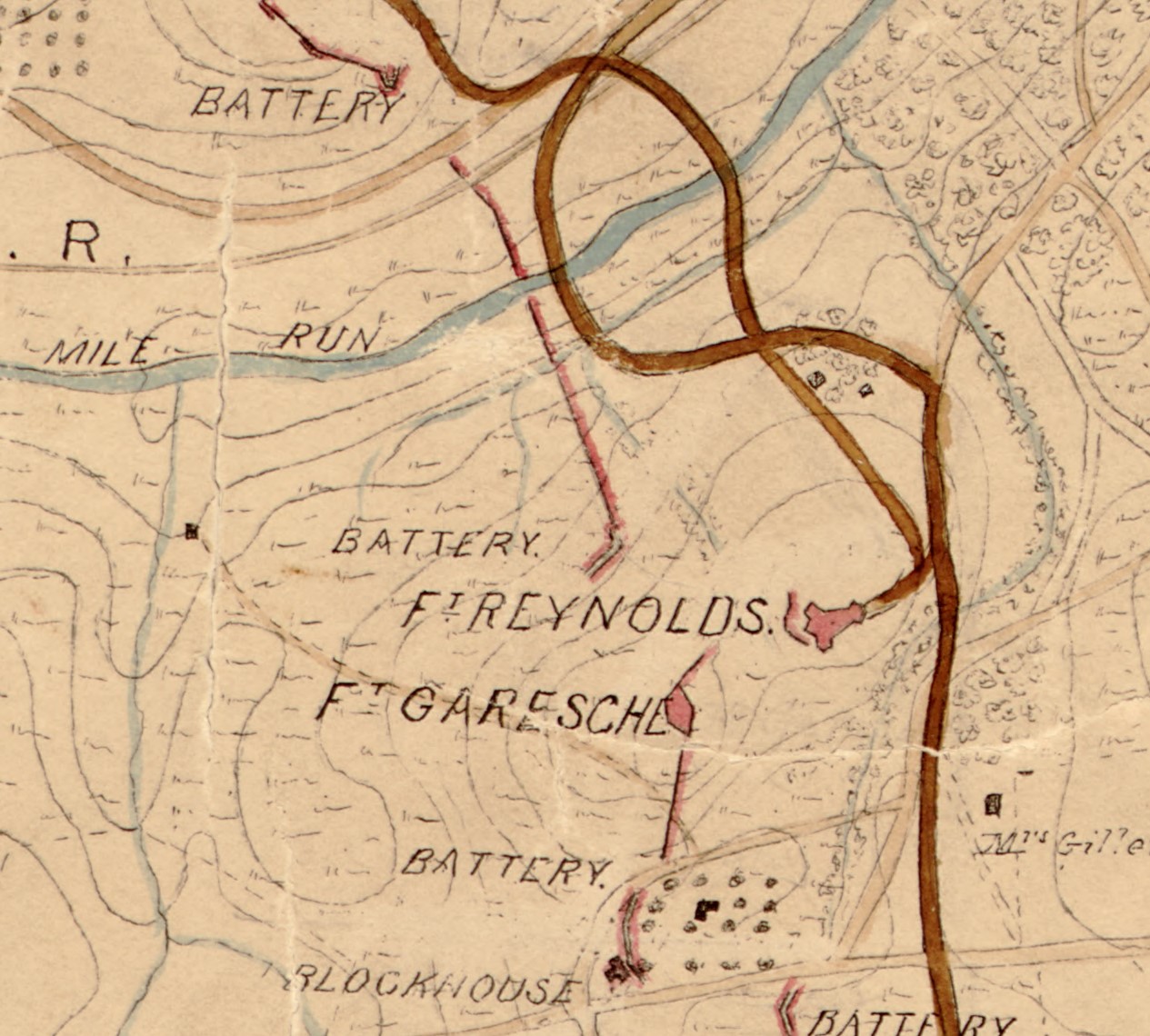 Map of the Environs of Washington: Compiled from Boschkes’ Map of the District of Columbia and From Surveys of the U.S. Coast Survey showing the Line of Defenses of Washington as Constructed during the War from 1861 to 1865 Inclusive. The red arrow points to Fort Reynolds and the blue arrow points to the approximate present-day location of the Village at Shirlington. Source: Library of Congress.

Joseph Cherner, a Jewish immigrant from Russia with a successful car dealership and repair shop, considered opening an airport near Four Mile Run but decided to invest in a shopping center instead. He purchased 200,000 cubic yards of fill to raise the grade by as much as 13 feet, channelized two creeks, and constructed roads and alleyways through the property. Cherner attracted new businesses to the development by offering tenants very low rental rates in exchange for a percentage of the businesses’ profits. He combined the names of nearby Shirley Highway (Interstate 395) and Arlington to name the area. The proximity to this still-under-construction roadway was meant to promote traffic to the new shopping center.

The shopping center opened in December 1943, with a supermarket, gift shop, clothing cleaners, beauty parlor, and shoe repair shop in one-story storefronts of limestone and granite construction with Art Deco architectural detailing. The layout of the streets was as it is now, with the shops facing each other across a central median. More stores opened in 1944, including a Gulf filling station which is likely the extant gas station but with substantial changes

While stores allowed African Americans patrons to shop, they were barred from services, such as eating at lunch counters and restaurants and using leisure facilities. This was particularly difficult for residents of Fort Barnard Heights and Green Valley, the primarily African American communities next to the shopping center.

Following Joseph Cherner’s death in 1956, his wife Ruth (née Schlom) Cherner, assumed the role of the president of the Shirlington Corporation. She led the company through a land swap with Arlington County’s Property Yard in May 1957 that increased acreage at the north boundary of the Shirlington Business Center by seven acres. She became a prominent businesswoman in the Arlington real estate market. Lansburgh’s Department Store opened in September 1959 on the former Property Yard land and served as a new retail anchor for the shopping center. In January 1960, the Nauck Citizens’ Association (a precursor to the present-day Green Valley Civic Association) proposed a business district along South Shirlington Road to offer services to people of color. This business area would include a motel, theater, restaurant, bowling alley, and office space for professional services. Lutrelle F. Parker, chairman of the Nauck Citizens’ Association, asserted that they did not intend for the business center to detract from desegregation efforts that were currently being undertaken throughout the south. Rather the citizens’ group aimed to supply necessary services to African American citizens until other commercial areas were desegregated.

In June 1960, spurred by protest movements across America, black and white college students held sit-ins at lunch counters around Arlington including Lansburgh’s Colonial Room and Woolworth’s lunch counter in Shirlington. Both businesses responded by closing their counters. After negotiations between demonstrators and business owners, Woolworth’s in Shirlington was the first lunch counter to desegregate on June 22, serving a group of black and white students. Woolworth’s action was followed that same day as Lansburgh’s, Kahn’s, Peoples, and Drug Fair desegregated their Arlington restaurants. The popularity of Shirlington declined in the mid-1960s and into the 1970s with the opening of several new shopping centers. In the early-1970s, Shirlington Business Center saw the closure of many of its anchor retail stores. Jelleff’s closed in 1972, followed shortly by Lansburgh’s (which was replaced by Best Products) and the Shirlington Motor Company’s Ford dealership, both in 1973.

Several revitalizations were considered, including one featuring a manmade lagoon. The owners abandoned this project before construction began. In July 1982, a new $250-million renovation began, led by developer Oliver T. Carr. Carr’s plan called for up to 429,000 square feet of additional retail space and 694,000 square feet of office space in 8- to 12-story buildings. It also included the construction of a 400-room hotel and 590 condominium units. The limestone and granite façades of the existing buildings were reused while most of the ground level architecture and all the interiors were demolished. The 1987 finished design included copper turrets and domes crowning the buildings at the entrance off South Randolph Street, Victorian-era inspired street lighting, cut-throughs for increased pedestrian circulation, and a large Beaux-Arts fountain in the central median. Federal Realty Investment Trust purchased what is now known as the ‘Village at Shirlington’ in 1996. In November 2006, the new Shirlington Town Center was unveiled, including the Shirlington Branch Library and a new location for the Signature Theatre Company. In July 2007, the County changed the name of 28th Street South to Campbell Avenue in honor of Edmund and Margaret Elizabeth Pfohl Campbell, who were instrumental in desegregating Arlington’s public schools. Elizabeth Campbell founded and was later president of WETA public broadcasting station, located in Shirlington.

Joseph and Ruth Cherner’s 1943 vision is still a destination shopping location in Arlington. The popularity of this neighborhood hub is evidence of the Cherners’ shrewd perception of the retail services the community needed.