Roberta Flack is known worldwide for her voice, songwriting and overall musical ability, for which she has won multiple Grammys. Flack has performed on stages across the world, and her roots are here in her hometown of Arlington.

Flack was born near Asheville, North Carolina, in 1937, and moved to the Green Valley (formerly referred to as Nauck) neighborhood in Arlington when she was five years old. Musical from an early age, Flack began playing the organ and piano around age 9 and performed at local churches including Macedonia Baptist Church and Lomax AME Zion. Flack grew up playing Chopin, Schumann, Bach, and Beethoven, and at 13, won a statewide contest by performing a Scarlatti sonata. One of her piano teachers was Lottie B. Bellamy, an Arlington resident and longtime organist at Macedonia Baptist Church. Flack’s mother, Irene Flack, was also a prominent community member, serving as the longtime chief baker at Wakefield High School and as an organist at Lomax AME Zion.

Flack attended Hoffman-Boston High School – then the only school available for African American children in Arlington – until age 15, when she was awarded a full music scholarship to Howard University. After graduating at 19, she went on to become a music teacher in Farmville, North Carolina, teaching about 1,300 students at all grade levels in the city’s segregated school system. 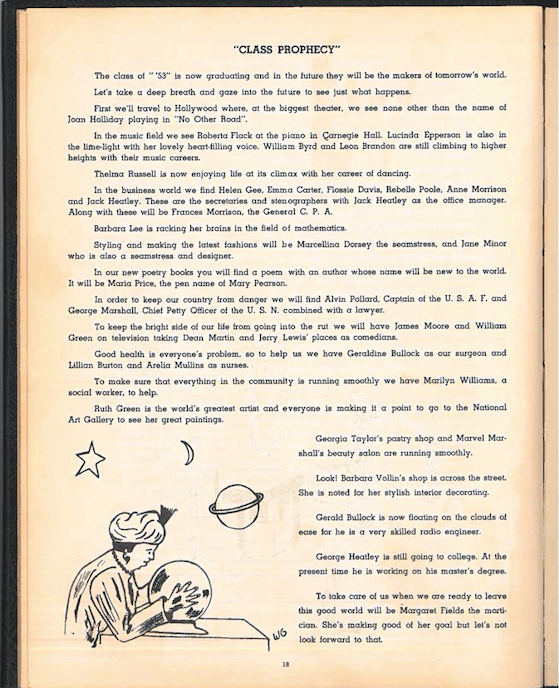 In Roberta Flack’s 1953 senior yearbook at Hoffman-Boston, she was listed as “most musical” in the class superlatives, and in the “Class Prophecy,” her classmates predicted she would play piano at Carnegie Hall. This prediction eventually came true when Flack performed there in 1971 (and again in 1981).

Flack's music career took off in D.C., where she also continued to work as a teacher at the Rabaut and Brown junior high schools in the D.C. public school system. She began performing in the evenings at locations such as the Tivoli Theater and Mr. Henry’s in the District. At the Tivoli, she also worked as a backing pianist for opera singers, and her spark as a solo performer came with a rendition of “Jingle Bell Rock” performed at the restaurant, where Flack said it was her "cue that people would listen to [her] as a singer.”

Mr. Henry’s became one of her regular venues, and the club’s owner, Henry Yaffe, even turned the apartment above the club into the “Roberta Flack Room” for her performances – adding in church pews and a Mason & Hamlin piano to create a more intimate energy than the more raucous main stage. She started off playing Sunday brunch sets for $20 a week, initially with a folk-inspired repertoire. However, as her fame and success as a performer quickly grew, she began to consider pursuing it full-time. Of this time in her life, she said:

"It took courage to leave my classroom job because I was a Black person who had grown up in Arlington, Virginia, through the ‘50s and ‘60s; now I’m teaching school in the late ‘60s and I decide I want to sing. These days, there’s lots of things that you can go for, but in those days you had to have a lot of heart and a strong desire to do that.” In 1969, she recorded her first album, First Take, with Atlantic Records. Aptly recorded in only 10 hours, the song’s discography was informed by pieces she had developed at Mr. Henry’s. Flack continued to return to the venue as her career took off, using it as a home base during her other performances in the District.

One of her first big hits was from that first album when in 1973 Clint Eastwood featured her song “The First Time I Ever Saw Your Face” (a folk ballad Flack had taught to her students in school glee clubs) in the film “Play Misty for Me.” Flack collaborated with many artists over the course of her career, including Donny Hathaway, Peabo Bryson, and for her album Oasis, Flack collaborated with longtime friend Maya Angelou on four songs, including “And So It Goes.”

Flack has continued to make music well into the 21st century, and in 2020, was the recipient of the Grammy’s Lifetime Achievement Award. Poster from “Roberta Flack Human Kindness Day” on April 22, 1972, in Washington, D.C., to celebrate Flack. Image by Lloyd McNeill & Lou Stovall, courtesy of Di and Lou Stovall from the “What's Going Around: Lou Stovall and the Community Poster, 1967–1976” exhibit at the Columbus Museum.

“Cover Me: The Stories Behind the Greatest Cover Songs of All Time” features a section discussing the history of Roberta Flack’s cover of “Killing Me Softly,” and the subsequent Fugees rendition.