Though many may not know the words to this reverential tune, Arlington has had an official song for more than 50 years.

“Arlington,” the County’s official song, was adopted unanimously in October 1970 by the County Board. The musical occasion was marked with a performance of the tune from a chorus of the Masons’ International Order of Job’s Daughters, who were dressed in 18th-century period costume. 10,000 copies of the sheet music and lyrics were later distributed by the Chamber of Commerce throughout the County. The song was composed by the Reverend Ernest K. Emurian (1912-2004), who from 1962 to 1981 was minister of the Cherrydale Methodist Church. In addition to his ecclesiastical duties, Emurian was also known for being a musician, poet, and writer, and wrote geographically inspired tunes about the Virginia cities of Portsmouth and Lynchburg in addition to Arlington, and penned multiple books about national songs and hymns. He was quoted as saying “If a place is worth living in, it’s worth writing a song about.”

Read: The 2015 County article “Official ‘Arlington’: Song Sung Blue and White at 45” delves further in detail about the 1970 Arlington song and Reverend Emurian. 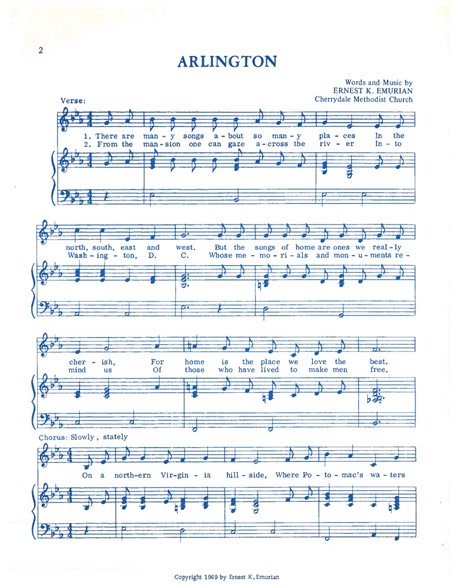 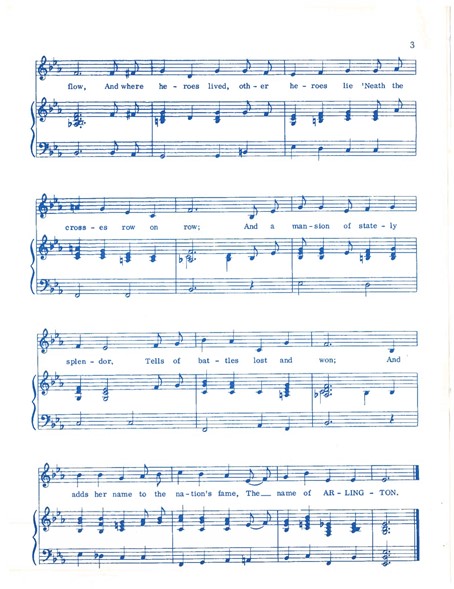 Sheet music and lyrics for the 1970 song “Arlington,” by Ernest Emurian.

The song caught a second wind in the 20th century when in 2000, the County Board reintroduced the tune with a performance featuring some of the daughters of the original Daughters chorus who had performed the 1970 debut of the song. And what might be called a third resurrection occurred in 2016, when Arlington TV recorded and aired a performance with some of the members of the original 1970 chorus.

Possibly even more obscure than the official song is a precursor to that 1970 tune written in 1938, though this version was never formally adopted as a piece of official County music. In August 1938, members of the local Hoffman family orchestra presented their song, “Arlington,” to the Chamber of Commerce. The tune was composed by Theodore G. Hoffman, who wrote the song with the intention for it to be used to “’ promote the public interest in and welfare of Arlington County.’”

Hoffman was a German immigrant who performed with his three sons, and who had also composed songs used by the U.S. Army during World War II along with other patriotic compositions throughout his career. A 1938 article describes the song as a march, with the lyrics paying homage to “businessmen, the neighborly spirit of the homeowners, the healthy climate, the atmosphere of happiness and the beauty of Arlington scenery.” 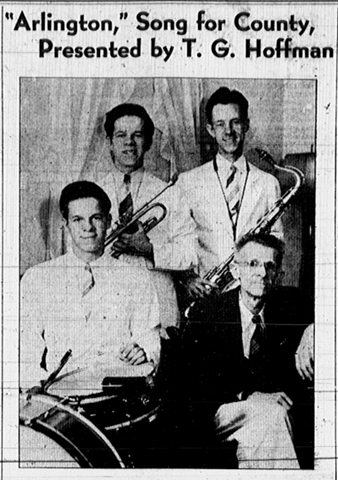 Photo from August 5, 1948, Northern Virginia Sun article by Margaret Troxell about T.G. Hoffman, who composed an early song for and about Arlington.

A few mainstream songs from recent years also reference Arlington, such as the Foo Fighters’ “Weenie Beenie,” named after the beloved County eatery, or “Arlington” by Fairfax-based band Emmet Swimming off of its 1996 album Arlington to Boston. However, neither of those tunes quite capture the detail and charming local specificity of the County’s official song.