The Center for Local History reflects on the passing of Ronald Deskins, a pioneer of the Civil Rights movement in Arlington County.

In Defiance of Massive Resistance

This historic moment – often referred to by the press at the time as “The Day Nothing Happened” owing to the lack of violence – is now marked by banners at Dorothy Hamm Middle School, housed since 2019 at the original site of Stratford Junior High School.

"I was pretty nervous that first day," Deskins said at a 2016 tribute to the actions taken in 1959. He went on to mention that a few students "made it their business to make our lives miserable…They were not successful…Although they called us plenty of names." Three police officers stand at the entrance to Stratford Jr. High School as the four black students enrolled in the previously all-white school arrive for classes in Arlington, Va., on Feb. 3, 1959. One of the officers records the scene with a movie camera. Approaching the entrance are, left to right, Lance Newman, 13, Ronald Deskins, 12, Michael Jones, 12, and Gloria Thompson, 12. (AP Photo)

Edward Hummer, a fellow Stratford and W-L student, interviewed Ronald Deskins for induction into the W-L Athletics Hall of Fame in 2018. At the time, Deskins was volunteering at a public library in Berryville, VA. Hummer recalled the experience of speaking with Deskins about his life:

“I was struck when I read about his very first reaction upon entering his first classroom...The four black kids were taken in a rear door to escape the throng at the front door…the other kids in Ron's homeroom were already seated and had been prepared for his arrival. When he was escorted in a few minutes after the bell, all their heads naturally turned to him as he entered. His first thought on seeing all those heads turn his way was to say to himself, "It's just me." 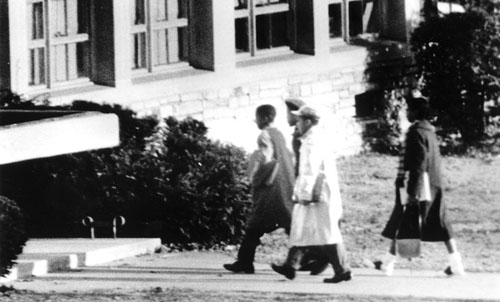 Dorothy Hamm Assistant Principal Lisa Moore remarked that it is "our expectation, for all our students and staff to know this history. The history that took place in this building, they need to know that, and live that."

"Our hearts are devastated," Moore added. "This was a huge loss for our community."

Mr. Deskins’ self-effacing manner was typical of his attitude towards his accomplishments and the contributions he made during his lifetime, including his role in the integration of the Fairfax County Fire Rescue Department. Mr. Deskins was the fifth Black firefighter employed by Fairfax County and he helped establish Northern Virginia Minority Firefighters Combined. He eventually achieved the rank of Captain and retired after 34 years of service.

Edward Hummer remembers the man who thought of himself as just me as “quite a guy. It was a great pleasure and a great honor for me to get to know him so many years later when he was inducted into the W-L Athletic Hall of Fame. I am greatly saddened by his death.”

The Center for Local History (CLH) at the Arlington Public Library collects, preserves and shares historical documents that tell the history of Arlington County, its citizens, organizations, businesses and social issues.

The CLH’s Community Archives includes thousands of pages of material related to the desegregation of Arlington Public Schools, and makes these materials available to students, researchers, scholars, authors, teachers and the community.

To learn more visit the Project DAPS website and read the 2018 blogpost, The Desegregation of Arlington Public Schools.

Because there are always more layers of history to find and examine, the CLH continually seeks community donations and oral histories; use this form to send a message to the Center for Local History or contact us at localhistory@arlingtonva.us.