Celebrate the 100th anniversary of the 19th Amendment with stories about women who have used their voices and their votes to better their communities and help shape the United States. Clara Barton is an enduring symbol of humanitarianism for her work during the American Civil War, where she played a fundamental role in distributing much needed provisions and medical supplies to the Union Army. She was also renowned as an educator, nurse and a founder of the American Red Cross.

Barton was born on December 25, 1821, in Oxford, Massachusetts, the youngest of five children. She had her first experience in nursing while caring for her brother David and later became a teacher at age 18.

At 24, she founded a school for children on the site of her brother’s mill and in 1852 she established the first free school in Bordentown, New Jersey. Barton resigned from her teaching position upon discovery that the school had hired a man at twice her salary. She left the post on the principle that she would never work for less than a man.

Following her teaching career, Barton began working as a recording clerk for the U.S. Patent Office in Washington, D.C., making her the first woman to hold the position. In line with her beliefs on the fundamental equality of women, she was paid $1,400 as a salary – the same as her male colleagues. After this milestone, however, she faced backlash. The then-Secretary of the Interior Robert McClelland opposed women serving in the government and demoted her to a copyist position at a lower salary.

February 13, 1860, Letter from Clara Barton to her nephew Bernard Vassall, which discusses women’s oppression. Part of the Clara Barton Papers at the Library of Congress.

In 1861, like all Americans, Barton’s life changed with the start of the Civil War. She quit her post in government and dedicated herself to bringing supplies to Union soldiers in need. She started by taking supplies to the men of the 6th Massachusetts Infantry housed in the unfinished Capitol building, some of whom had been her students and her peers growing up.

Barton collected relief articles including clothing, assorted foods, and supplies for sick and wounded soldiers, and appealed to the public to garner more donations. She also read to soldiers in the camps, wrote letters and prayed with them. Soldiers of the 6th Regiment Massachusetts volunteer militia, one of the groups that Clara Barton helped bring supplies during the Civil War. Image courtesy of the Library of Congress.

In 1862, she received official permission to transport supplies to battlefields and was present at every major battle in Maryland, Virginia and South Carolina. After the battle of Cedar Mountain in August 1862, Barton brought in a wagon load of supplies drawn by a four-mule team to the field hospital. Upon her arrival, the surgeon on duty commented: “I thought that night if heaven ever sent out a[n] … angel, she must be one – her assistance was so timely.” This led to Barton gaining the nickname “Angel of the Battlefield.”

Of her time on the battlefield, Barton said: “I may be compelled to face danger, but never fear it, and while our soldiers can stand and fight, I can stand and feed and nurse them."

Though she had no formal medical training, in 1864 she was named head nurse for one of General Benjamin Butler’s units. In the aftermath of the war, Barton was also involved in helping prepare former enslaved people for freedom, as well as marking graves, testifying to Congress about her experience in the war, and helping locate missing soldiers. To help the latter cause, she established the Office of Correspondence with Friends of the Missing Men, which she operated out of her home on 7th Street in Washington, D.C. The Office received and answered over 63,000 letters and identified over 22,000 missing men during its four years of operation. A tracing service similar to this operation would eventually become a crucial part of the operations of the Red Cross. “Clara Barton. A wartime photograph by Brady,” ca. 1890-1910. Image courtesy of the Library of Congress.

After the war, Barton continued to serve her nation. After a visit to Europe, she was inspired by the Red Cross in Geneva, Switzerland, and lobbied to establish a branch in the United States. On May 21, 1881, the American Association of the Red Cross was formed, built up by Barton’s work writing pamphlets, lecturing and meeting with President Rutherford B. Hayes on the topic of support for the organization.

Barton was elected the group’s first president, and in 1882, the United States joined the International Red Cross. As its leader, Barton oversaw relief work for victims of the Johnstown Flood in 1889 and the Galveston Flood in 1900, among other events. She remained with the Red Cross until 1904, and that same year established the National First Aid Association of America. 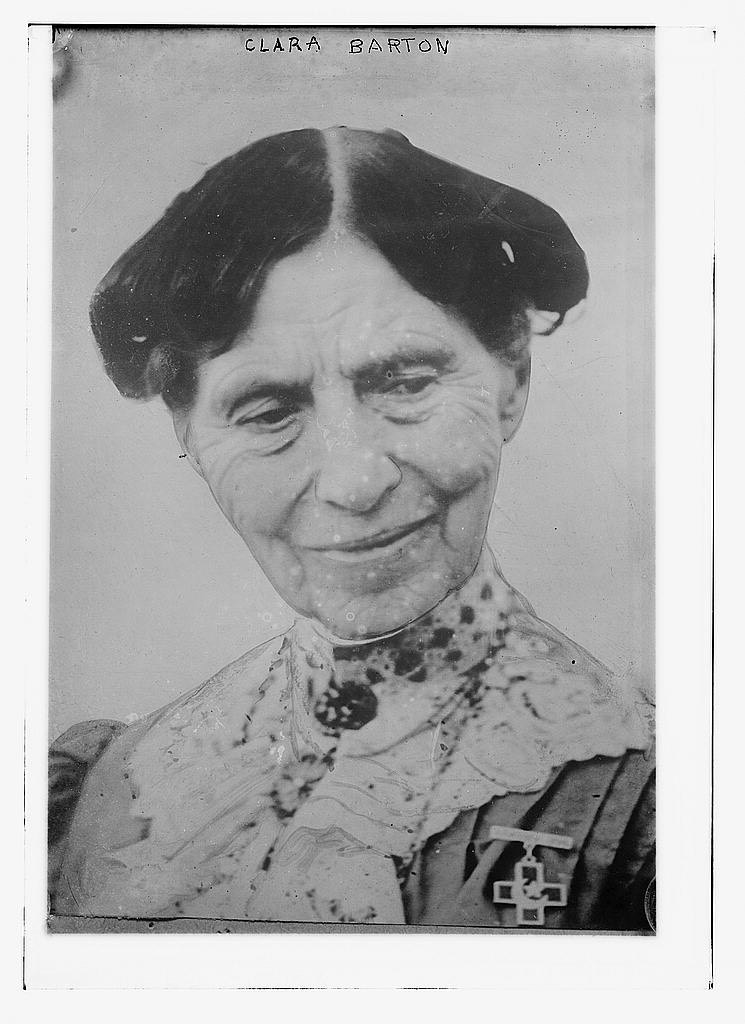 Clara Barton, ca. 1911. Image courtesy of the Library of Congress.

Barton died on April 12, 1912. Since her death, Barton has frequently been turned to as an example and reminder of American heroism, as in this newspaper article from May 31, 1940, written by The Northern Virginia Sun in the days leading up to World War II: