Looking for information on the Korean War? Try The Encyclopedia of the Korean War: A Political, Social and Military History. We have just added the second edition of this 3 volume reference set – now covering February 1866 – December 2008 – to the Reference Collection at Central Library.

Although the second edition is only available for use at Central, the first edition can now be checked out directly at Central, or by placing a hold on the volumes.

Why a second edition?
Reviewer Kaye Talley of Booklist explains, “Most of the approximately 600 entries in the first edition have been revised, and more than 120 new entries have been added. There are 148 primary documents, a gain of more than 10. References for all entries have been updated.”

To read the entire review, go to the catalog record, then scroll to the bottom of the page under Extras and click on the link for Reviews.

Maria, one of the librarians at Central Library, told us an excellent story about an Arlington teen and summer reading:

A young teen girl came to the desk looking for a couple of specific titles. I helped her and got her the books. I told her about Teen Get Caught Reading and explained that if she signed up, she could possibly winning $100 or other gift cards.

Then I told her about helping Haiti. Her reply was: “So I will be a winner just by participating.”

She was so sincere and happy that she would be helping Haiti just by doing her reading for school and pleasure. It was a nice experience for me as a librarian to see. 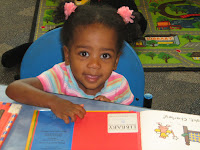 Sarah started attending storytimes at the Shirlington Branch Library when she was just 17 months old.

Sarah’s mother, Mimi, recently told us that before attending Library storytimes her daughter used to only reach for toys. But after only a few storytimes, Sarah started reaching for books instead!

Now a mature bibliophile of 23 months, Sarah wants everyone to know how much she loves the Library. Thank you, Sarah! 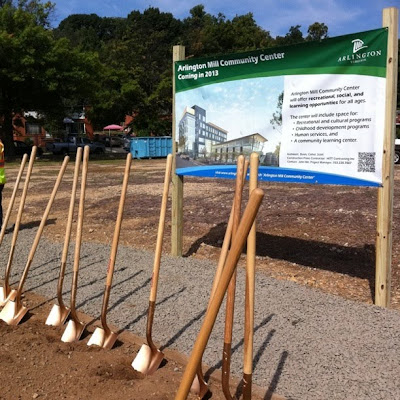 A hearty congratulations to Arlington Mill neighbors as ground has been broken on the west end of Columbia Pike for the new Community Center, to be completed in the summer of 2013.

On Monday, Sept. 19, 2011, The Virginia Room’s Arlington Reunion History Program will host a community discussion on “Queen City,” Arlington’s black community after Freedman’s Village and before the Pentagon, at the Central Library Auditorium, from 10:00 am – 12:00 p.m.

The original residents of Queen City were descendents of the residents of Freedman’s Village, which had been established by the federal government during the Civil War as a home for displaced/freed slaves. A tightly knit African American community, Queen City was particularly focused on providing education for its children and was described by George Vollin, a former resident, as “a real happy, solid community.”

The neighborhood eventually disappeared when residents were displaced in 1941 as construction on the Pentagon and surrounding roads began: 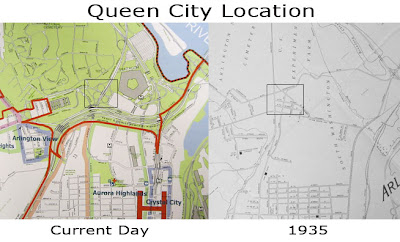 “Queen City was not razed for the Pentagon building, but the overall Pentagon project. In order to accommodate the large number of individuals who would be commuting to and parking at the Pentagon on a daily basis, extensive accommodations had to be made for the automobile.

The cloverleaf highway structure, which the Columbia Pike feeds into and is found to the west of the Pentagon, remains the exact location of Queen City. Therefore, Queen City was destroyed for Pentagon’s needed transportation corridor, which eventually would come to include over thirty miles of highways and ramps, including twenty-one overpasses.”

If you can’t make it to the program, and would like to learn more, you can visit the Virginia Room, where the local history archive includes Arlington’s Queen City, by Claire Burke.

If you missed this talk, the Ballston-Virginia Square Patch sent a reporter to the program, and published an excellent recap of the event.

Brumback Realty Company of Clarendon, founded by a father with six sons, was a builder in Country Club Hills, in 1928-29.

Country Club Hills was developed from 126 acres of beautiful hills and wooded land, from the old Civil War era Grunwell estate, and commanded a view of Washington, D.C. One of their architects was A.F. Thelander, who designed and built his own home in Country Club Hills at Rock Spring Drive and Avondale Avenue, facing the Washington Golf and Country Club.

The English Tudor, Colonial, and Spanish style homes combined brick and stone and included two car garages, variegated tile roofs and copper gutters and flashing. The first 15 homes sold for an average of $20,000 in 1929.

The Virginia Room has some photos from Brumback Realty showing tastefully furnished interiors and the distinctive exteriors of homes that are still admired today.

You can read more about Country Club Hills on Our Back Pages.

On Saturday, July 9, four smiling faces walked into the Westover Branch Library, and handed the librarian on duty an envelope full of money, and a letter.

Were they there to pay a fine? No!

They had spent all day manning a lemonade stand in a nearby park, earning an impressive $23.25. When they remembered that the Library will donate 50 cents to help rebuild Haiti’s Petit-Goave Library for each child who turns in a completed summer reading log, the kids realized their lemonade money could help us do even more to help Petit Goave.

We are so grateful for their help, and their thoughtfulness! 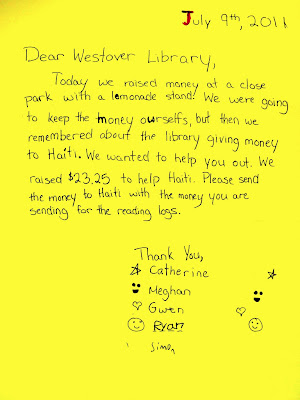 If you love whimsical found-object art, be sure to check out Diana Gammerman‘s sculptures, on exhibit on the lobby of Central Library through the end of August.

Gamerman works in a wide range of media such as oil paintings, watercolors, prints, and ceramics. She received a Masters in Art from Michigan’s Wayne State University and also studied at the American University and Smithsonian Institute in Washington DC.

Cooper Caputo, age 10, will be showing his photographs of airplanes at the Westover Branch Library this month.

Cooper is passionate about all things aviation. He has an extensive collection of model planes and is building an airport diorama.  He has photographed planes at many different airports, but this series comes from “plane-spotting” at Dulles International Airport late one day last fall.

Photographs can be purchased directly from the artist.

As of July 30, 6811 kids have signed up for summer reading, and to help send money to rebuild the Petit Goave Library in Haiti.

In 2009 the International Federation of Library Associations and Institutions (IFLA) began the sister library project. Since then, we, the Youth Services team at Arlington Public Library (Virginia) hoped to participate.

Being that our library system is in a part of the United States that is very rich in diverse cultures, it made perfect sense that we reach out to a library in another country, maybe one to which our communities had ties.

During a year of budget cuts, the idea was kept on a back burner. As soon as staffing needs stabilized though, we revisited with enthusiasm IFLA’s Sister Libraries for Children’s and Young Adult’s Reading Programme. We were propelled and excited to incorporate IFLA’s idea into our next summer reading program since this
year’s theme was One World, Many Stories.

During a Youth Services Team meeting last year, we all agreed that we liked the idea of being one of IFLA’s sister libraries. One of us suggested partnering with Haiti because the country had not yet recovered by any means from the horrific natural disaster several months earlier; the people there still needed much help.

At that point in time, Haiti was not participating in IFLA’s Sister Libraries Programme but through a quick search online we discovered a website dedicated to Haiti’s libraries created by New Trier High School (Illinois) Librarian Deborah Lazar. Through her website we realized that Ms. Lazar had visited Haiti both before and after the earthquake. She had been to Petit Goave and seen the children attending programs in the ruins of their destroyed library.

We contacted Ms. Lazar, several states away from Arlington, Virginia in a suburb of Chicago, Illinois. An enthusiastic advocate for Haiti and her libraries, Ms. Lazar was in contact with Francoise Thybulle, the director of Haiti’s Libraries, and communicated with her our desire to sister with Haiti. Several weeks later, Ms. Thybulle, in the throes of rescuing Haiti’s National Library, approved of the relationship and we both filed the sister library forms.

Upon the anniversary of the 2010 earthquake we announced our sisterhood. In successive team meetings, we the youth services team of librarians at Arlington Public Library discussed ways to make this relationship meaningful and relevant for both our communities. The Friends of the Library were contacted to ask if they would like to be involved. Due to the wonderful dedication of this team of dedicated volunteers who raise money for library programs, for each child and teen who completes their summer reading goal this year, a donation will go to Petit Goave Library on their behalf. As a result, we hope to send 2,000 USD to our sister library through ALA’s Haiti Relief Fund.

The month of June is a time when we, the youth services librarians visit each public school in our service area to excite every student about reading over the summer. This year they have twice as many good reasons to read. To each and every class, we explained how to participate in our summer reading programs and how just by reading they will help Haiti.

In addition to the funds the Friends will donate, we tried to think of other ways our children could be directly involved. We contacted Arlington Parks and Recreation Department’s After School Program staff. The staff and children of this after school program designed and created beautiful papier-mache tap-taps, the iconic colorful buses from Haiti, to help promote our sister library and to highlight this year’s summer reading theme, One World, Many Stories. We celebrated the unveiling of the tap-taps at the participating branch libraries during which we read the Haitian folktale Bouki dances the Kokioko : a comical tale from Haiti and Edwidge Danticat’s children’s book Eight Days, decorated t-shirts for the children of Petit Goave and celebrated our work together eating tropical sorbets and
plaintain chips.

Via email, we had also contacted Mr. Midley Joseph, the librarian in Petit Goave to ask about the needs of his children. One of the numerous items cited were t-shirts. For this reason, during the Teen t-shirt designing programs this summer, our youth will decorate shirts for themselves and create unique designs with positive messages on new white t-shirts of various sizes (including those for infants), to send to our littlest “brothers and sisters” in Haiti.

As a team we are continuing to think of ways to connect with our sister library and hope to create bookmarks, portable murals, quilts, and cards to send to Haiti during future youth programs. Once the Petit Goave library is rebuilt and postal service, Internet access and more supplies are enabled, we hope our children will have the opportunity to write to each other, and email or Skype with our Caribbean friends.